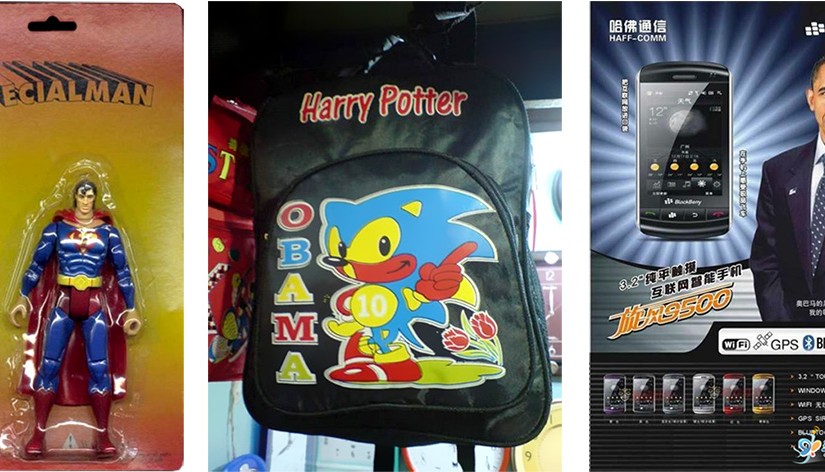 For decades corporate economists have provided half-baked proofs to support the claim that infringements of intellectual property rights lead to large losses for the global economy. The OECD estimates that 2.5 million jobs will be lost worldwide in 2015 due to non-compliance with copyright laws. Despite all the algorithmic creativity and obscure data deployed to compute this number, “the model struggles with (…) a single market outside of Europe: China.” Indeed. China is one giant proof that the absence of copyright enforcement can actually empower millions of people to learn, and that it can eventually become beneficial for both the local and global economy.
(Photo below: Reuters/Jon Woo) 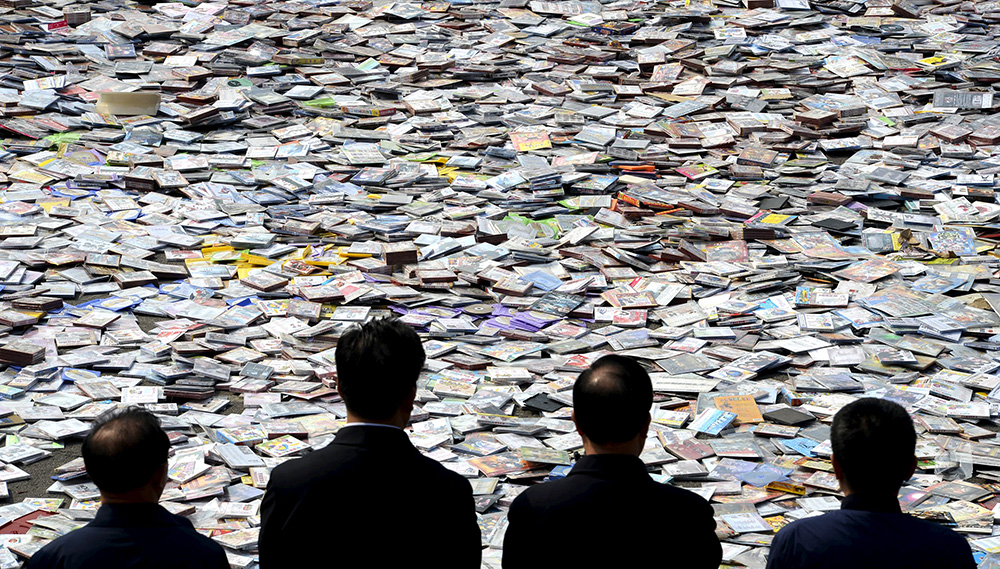 The Made in China phenomenon has provided cheap labor and an unbelievable growth opportunity to global corporations during the last decades. Its existence has given birth to a parallel and flourishing local counterfeiting industry, often known as Shanzhai manufacturing. Riding towards the Shenzhen outskirts, the flatness of the Pearl River Delta coast gradually transforms into hills and mountains. The gray walls of factory towns spurt out of this green landscape: “small-sized speculative standard factories literally rise from the farmlands as bricks and tin sheds replace paddy fields.” Here stands the legendary home of the Chinese pirates: the Shanzhai. In Chinese popular culture, a Shanzhai (shan: mountain, zhai: stronghold) refers to a remote village in the mountains where bandits had once recreated their own form of society, far from the rules of the emperor. Producing fake Samsung phones or the stepper motor of your latest 3D printer, Shanzhai factories are small production units. They were originally run by families that came to the Pearl River Delta for a ride in the global business world. Running selfie-stick assembly lines like they were carrot fields, these manufacturers grow technological products with an Internet connection as the only R&D capacity. They read product reviews, study pictures, buy samples, and tear them apart to see if they can recreate some sort of equivalents for less cost. Cheaper rubbers, recycled parts, older chips: they just need to assemble something similar. No slide decks by a 20-something lumbersexual “growth hacker”: they just build products for a cheap price. Corporations hate them. Millions of people use their products to reach the shores of the Internet everyday. After 20 years of frenzy, the Made in China phenomenon is not the engine for economic growth it once was. Workers are demanding a minimum wage, welfare and all – time to relocate south. China will now begin its transformation into a gigantic robotized infrastructure of production. Japan has shown the way, but the eco-compliant optimization-friendly integrated “smart” megacity will be Chinese. Its headquarters are already installed in the outgrown fishing village of Shenzhen. Located in the gigantic industrial hub of the Pearl River Delta, Shenzhen sits just next to Hong-Kong’s world-class business facilities. Tablets, drones, biotech, or open-source hardware, most components of the world are bought on weight from Shenzhen’s local market. Thriving with connected products and launches on Kickstarter, the whole place is currently busy redefining the future of technology. The “maker movement” has found a new home, and teams from all over the world are coming to get their piece of the new industrial cake. There is still one question though: how have communist farmers transformed into cyber-geeks that want to run global industry? How did they learn to follow tech trends, run factories, create products, and design next-gen service-based electronics?

In 1980, less than 3% of Shenzhen workers had attended middle school. History books will tell us that good managers from NASDAQ companies came to China to train those people and that teachers from the Communist Party helped turn them into skilled workers. Reality shows something else: when you have no resources, no proper education system, and no mentors at your disposal, then you just learn from your surroundings. You copy, you paste, you reproduce, you modify, you struggle – and you eventually improve. In Shenzhen’s eastern district of Longgang, a village called Dafen specialized in selling replicas of famous paintings. Andy Warhole, Vincent van Gagh, Jackson Pollack, the signatures of Dafen’s anonymous painters delighted tourists for a decade. Today, the counterfeiters are long gone and Dafen has become a market for Chinese artists to sell their paintings. A quasi-industrial process of copying masters has lead to the advent of a local scene, raising questions about how to make space for original creation. Benjamin thought that mass production will never anchor in time and space, and will just prove to be an illusion of art. Maybe he was right. Maybe copies are just a temporary state for learning. As Dubuffet puts it: “The essential gesture of a painter is to coat.” And, well, you should always learn from the best.

The quality of fake products in a market like China’s varies tremendously. You can buy a (fake) pair of Ray-Bans for 20 cents or 60 dollars. The 20 cent one will last a day and break, while the expensive version will be exactly like the real one, including the (fake) guarantee card. The classification for counterfeit goods is pretty casual for Chinese people: A-goods (A货) are the best and are almost indistinguishable from the real ones. B-goods are lower quality (B货), and it goes down until you reach Z, which are just big jokes disguised as actual products. Many online retailers will advertise their AAA-goods which are super-perfect, even better than the original – like a pair of Nike shoes with an extra Adidas logo on them. There is of course craftsmanship in counterfeiting: it is no easy task to retro-engineer the minds of 10 Stanford graduates by opening the latest phone model. Still, the more straightforward way are the “day-night” factories: you make shoes for Nike during the day, then you make Nike shoes for you during the night.

In the 90s, the PC market was still in its infancy. Intel’s founder Gordon E. Moore and its famous law on computation opened the door for the exponential growth of computing power. The new gold rush was turning sand into silicon so fast that computers barely had time to hit the shelves before becoming outdated. Manufacturers just couldn’t follow. In 1995, a shipment of PCs lost 1.5% of its value per week. The trip from China to the US took several weeks and this was becoming intolerable for Intel, who couldn’t sell their new Pentium CPU as fast as they wanted to. They decided to introduce the ATX platform by providing all technical drawings and specs, so everyone could start making motherboards for the latest models. In a matter of months, tons of very small companies in Taiwan started to produce “white-box” computers, machines without brands or even product numbers. They were assembled and shipped from Taiwan, and the processor was added directly in the shop upon arrival. After less than 10 years, those “no-brand” computers had become the leaders in the global market with more than 30% of overall PCs. Inspired by the story, the giant Taiwanese chipmaker UMC decided to scale this “white-box” approach into a new and fast-growing market: the mobile phone. It turned one of its R&D projects into a spin-off called Mediatek (MTK), which started to sell kits containing blueprints for both hardware and software. They also provided training and support to thousands of very small factories to create cellphones based on their kits. When everyone in the West was still buying a Nokia, MTK was turning Chinese assembly lines into design houses. Just grab an MTK kit, find a plastic case, add a few buttons, flash an OS, and your product is ready. You want a Samsung phone in the shape of Michael Jordan? No problem, just wait a minute. With 50 ringtones and LEDs on the top? OK, I will ask my brother. In 2010, more than 100 million phones containing MTK chips were sold, mostly in Southeast Asia, Africa, and India. Meanwhile, MTK has been repeatedly accused of and sued for patent infringements of any possible technologies. This “unfair” call against competitors has created one of the fastest-growing industrial sectors: the mobile Internet. The Power Bank Phone that has suddenly appeared in the streets of Accra in Ghana is a good example of this story. While westerners like to send suit-wearing executives to negotiate deals, the Chinese usually do business as individuals or families. Thousands of Chinese have recently moved to Africa to start all kinds of businesses there. One of them seems to have experienced the frequent power cuts in West Africa, and found that really annoying. To solve this problem, he imagined a phone that could provide electricity. As people in Ghana apparently like to have different numbers, it should also contain three SIM cards. Our guy called his cousin in Guangdong and asked him if his factory could produce such a phone. A few days later, the first batch was in a container and after a week you could find it in Accra’s markets. There is even no need to add fake Samsung or Ericsson branding on the box; just print the specs and a picture of the phone and that’s it.

The Shanzhai industry is an exemplary case of market-driven modern technological innovation: fast, consumer-centric, incremental product development. Design theory could sure learn a thing or two from those Chinese guys. Here, a good design derives from the availability of starter kits to build on, the capacity to copy and integrate existing features, and the facility to access production means in an almost trivial manner. Still, before discussing the “Shanzhai model” of innovation in salons, let’s not forget some other key elements for success: a cheap labor force and a strong political framework. The Chinese Communist Party and its enforcement of broken work regulations should take credit in today’s design and innovation frenzy. Another interesting feature of Shanzhai industry is that because they were the pirates secretly working in remote factories, they built a vast system for cooperation and competition. They shared plans, news, retro-engineering results and blueprints on instant messaging groups. Despite not having a promotional label like “open-source” and the like, they were actually practitioners of distributed manufacturing. In many regards, Shenzhen echoes the dream of a “fab city” where design houses and small factories collaborate for the public and private good. The continuation of Shanzhai is open-source manufacturing, and local players like Seeed Studio or Cubietech have understood it completely. This new generation of Chinese makers is gathering a large community of tech followers, with all the best practices from documentation, community care and promotion. You can freely check the quality of their designs and have nice and enjoyable tours in their factories in Shenzhen. Far from the grim world of pirates, they publish methodologies and plans online, support their users, and will even make your crowd funding campaign a success if you ask them. They know that products aren’t born in the mind of a designer, but in the hands of a factory worker.

For decades, foreign companies went to China and left with what they paid for: very cheap stuff that barely works. Indeed, you cannot expect an illiterate farmer to produce a Swiss watch on day one. After years of underground experience at the margins of the global production system, Shanzhai manu-facturers have come up with a new model of production that may influence generations of designers to come. Copying, counterfeiting, and reusing existing inventions has contributed not to the destruction of pre-existing industry, but to its optimization. Mostly, it has covered the costs of training thousands of Chinese manufacturers while creating a highly profitable local economy. Instead of contesting an existing model, the transformation of Shanzhai manufacturing into an open-source model for mass production may even reinforce the current craze for efficiency in technological development. If free access to copyrighted resources proves to be harmful in the long run, it won’t be because of losses due to counterfeiting but from the application of so much knowledge, resources, and skills to the wrong purposes.

2 thoughts on “BANDITS BROUGHT TECHNOLOGY TO THIS WORLD”